High school is where you start to become an adult. That’s my understanding at least. You’re still young but you must clarify your understanding of the world, as well as your place in it. Many of us begin to realize what taxes were, start to prepare for standardized tests that indicate our college options, and think about planning career paths. Some started to analyze and invest in the stock market, through our parents.

A more prominent part of high school, though, is dating/relationships. (You probably remember this part the best.) Raging hormones causes dating and relationships to become easily noticeable. (Recall  every girl crying because her boyfriend broke up with her.) We want that lovey-dovey shit, often found in Spanish soap operas. And with these newfound relationships came better understanding of expectations. (Think back to every single show centered around teenagers in love i.e The Vampire Diaries.)

I wasn’t the most appealing guy, but I was nevertheless curious about dating and relationships. One day, I was sitting in the car with my cousin-in-law, Prabh. She had married into my family, and we had all started becoming close to her. She was driving to get frozen yogurt (phenomenal!) in her Lexus, and I had joined her. With nothing to lose and her being older, I asked Prabh about relationships. She gave me the greatest lecture: “The First Love Syndrome”. (This is where it gets fun for me, maybe not so much for you, as you start to reminisce.)

She explained that every girl has the “First Boyfriend Syndrome”: the girl becomes emotionally invested in a guy for the first time. She may have had sex with a few guys before this ‘one’, and maybe she was even romantically interested in a few. But this specific guy is THE emotional interest, and she hasn’t been drawn to anyone as much as him before. She ignores his fallacies and the obvious indicators that this relationship isn’t meant to last, because it’s likely one of the first few serious relationships she’s had and she’s still young and has much to learn.

After a while, she notices the late-night texts to other girls. The arguments start to escalate. Her friends hate the guy, and try to reason why she should leave him. But she tries to convince them, and maybe herself, that he’s changing. Maybe he is, but she hasn’t realized that it’s not for the best. Well shit, maybe this ‘first relationship’ isn’t supposed to last. Life isn’t all fairy-tales, right? But her naivety gets the best of her, and she makes the transgression of accepting him even after he makes blatantly stupid mistakes. (Why take him back if he cheats?) Or maybe they were the right couple, but met and dated too early. Even after they eventually do end, she keeps thinking about him. And sometimes he’ll even text, and those emotions will flood through once again.

And before you go any further, guys can feel this too. There will always be that one girl who emotionally wrecks a guy, hitting him harder than a train. If you care to read about my first experience with “The First Love Syndrome”, click here. You can’t quantify how fast someone can fall for someone else, be it a month or a year.

Your following relationships stem from the first relationship. That very first emotional connection started to form your basis on what you seek in potential partners. In this constant search of the perfect ‘one’, we forget about ourselves. We become so captivated in finding this perfect person, some of us jumping from one relationship to the next. Build your goddamn independence. 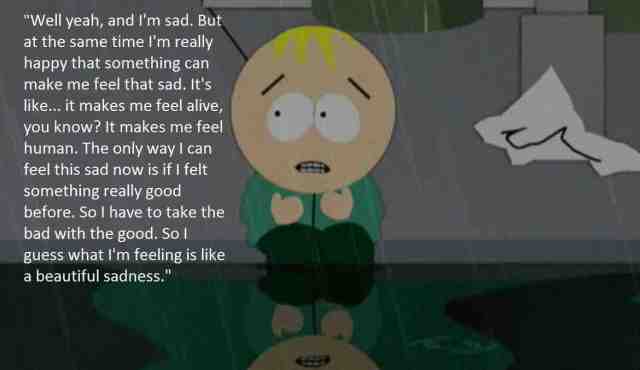 I’ll confess: I don’t ‘get’ relationships. If you read my blog post about my own experience with this, you’ll see how long I wasted useful time thinking about someone that had no relevance to my life anymore. These days you wind up emotionally invested in someone, while neglecting your own desires and betterment. I’m sure that lovey-dovey shit is great, but so are you. Put yourself first because you’ll be living with you the longest. That’s what Prabh taught me, and it’s a lesson I’ll hold dearly.

Have your grandmother read this!